Home » Dog Training » What is Schutzhund and why is it good for your dog?

Schutzhund is a German term that means “protection dog” and refers to a dog sport that focuses on a dog’s obedience, tracking, and protection skills.

Also known as IGP, and IPO before that, Schutzhund is a very competitive sport that evaluates how likely a dog is to excel as a working dog.

So, let’s take a closer look at Schutzhund training, what it entails, and some of its basic rules.

The long-lasting history of Schutzhund training 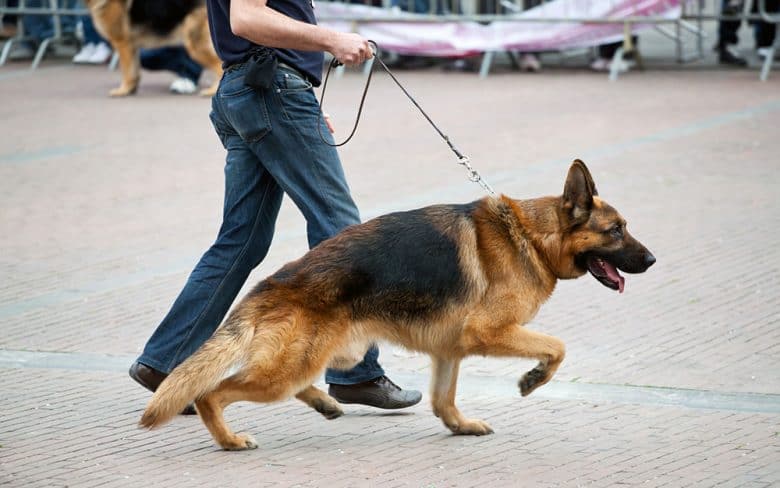 Schutzhund was developed in the early 20th century in Germany, where it was used as a suitability test for German Shepherds.

German Shepherd dogs still have to acquire Schutzhund titles and possess a breed survey, a certificate of endurance, a confirmation rating, and hip x-rays before they can be bred in Germany.

After a while, Schutzhund training became open to other German protection breeds, such as Dobermans, Boxers, Rottweilers, and Reisenschnauzers (Giant Schnauzers).

Today, the sport is open to all breeds and available around the world. However, it is the most popular in other European countries, Australia, Canada, and the USA.

Many Schutzhund clubs are operating in the United States, including:

All these clubs revolve around Schutzhund and similar protection sports. As we already mentioned, Schutzhund is competitively known as IGP, but it was known as IPO before that.

That means that IGP is the updated version of IPO, both of which are basically the same as Schutzhund training.

Another sport that is fully comparable to Schutzhund is American Schutzhund. It is the latest version of the sport with tiny, if any, differences.

The sport of Schutzhund on international stage is governed and regulated by the Federation Cynologique Internationale (FCI) since 2004, after two German organizations called the Verein für Deutsche Schäferhunde (SV) and the Deutscher Hundesportverein (DHV) gave up the control.

While all dog breeds can compete in FCI events, protection breeds like German Shepherds, Rottweilers, and Belgian Malinois’ still dominate the sport.

Schutzhund offers many benefits to dogs and dog owners. It is a tremendous physical, mental, and social outlet for dogs. The sport also serves as a valuable breeding tool, keeping the breed’s quality high.

Schutzhund clubs give owners and dog trainers a chance to be a part of a group of people that shares common interests.

Different Schutzhund titles and their requirements

However, before a dog can earn a Schutzhund title, he must first pass a temperament test and earn the BH degree. This test evaluates the dog’s temperament and his behavior around people.

The BH test includes basic obedience, such as heeling on and off-leash, downs, sits, and recalls, as well as his reactions to strange noises, crowds of people, cars, and other dogs.

Once a dog earns the BH degree, he can enter Schutzhund trials and earn titles. There are three basic Schutzhund titles awarded to dogs and their handlers:

The requirements for each phase and level of Schutzhund are clearly stated on the FCI website but you can also check the DVG and USCA websites.

The requirements are also explained in detail when you join any Schutzhund club in your area.

All about the three phases of Schutzhund

You’ve probably memorized the three Schutzhund phases by now – tracking, obedience, and protection. So, let’s take a closer look at these phases.

The tracking phase starts with a temperament test to confirm the dog’s mental soundness, which includes a close inspection on a loose leash to ensure that the dog is neither shy nor aggressive.

The tracking test is performed on a track (natural surface like grass or dirt) laid earlier by a track layer. The track consists of numerous turns and includes a certain number of small, man-made items.

The length, age, and complexity of the track will be different based on the Schutzhund title, as well as the number of items.

The dog is supposed to scent the entire track and find these objects.

When the dog locates the object, he needs to lie down with the item between its front paws or indicate the item’s location in another, previously determined manner. 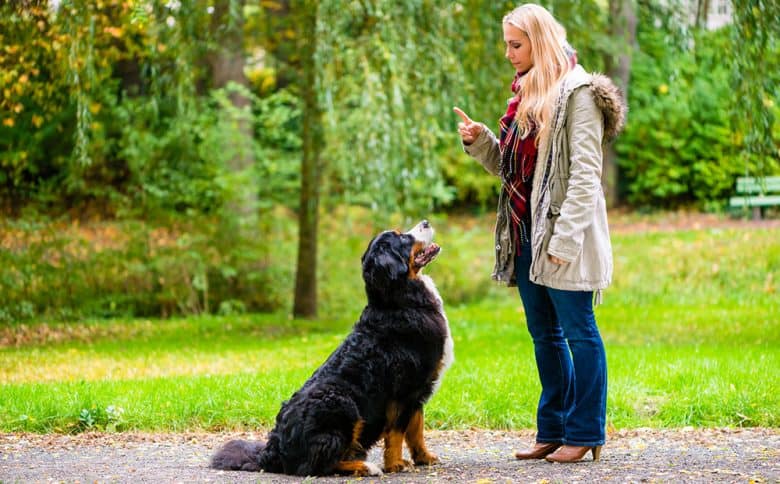 Schutzhund obedience tests are similar to the American Kennel Club’s obedience events since they focus on various heeling and field exercises.

The dog is commanded to stand, sit, and lie down while his handler keeps on moving. Then, the dog is recalled to the handler from these different positions.

The handler may also command the dog to retrieve over a hurdle, a slanted wall, or on a flat surface, with dumbbells of different weights.

The dog is also commanded to run from the handler in a straight line and lie down after.

Finally, the dog should remain in a lying down position at the end of the field, away from the handler, while another dog does these exercises.

Being firm and consistent is key to obedience training, along with positive reinforcement. You can find many valuable tips on dog training methods online, especially on the Leerburg dog training website.

One of the main exercises includes finding a hidden person that acts like a human decoy and guarding him until the handler comes. The dog should pursue the decoy if he attempts to escape and grip him firmly.

The same thing applies if the decoy tries to attack the dog’s handler.

The final test is sending the dog after the decoy when he comes out of his hiding place at the end of the field and refuses to stop when the handler commands him to.

The decoy will also run at the dog at that point, threatening him with a stick. The dog’s job is, once again, to grip the decoy.

Each of the grips made by the dog needs to be firm and placed on the padded sleeve. The dog also needs to stop gripping on command or when the decoy stops running away or fighting.

In addition to courage and grip strength, the dog also needs to have a few “cross-over” traits to excel at protection training:

What will the judge evaluate in a Schutzhund trial?

Each of the three phases is worth 100 points. To pass the Schutzhund trial and earn a title, a dog needs to earn at least 70 points in each phase.

Dogs that fail to achieve this or fail to pass the pre-trial temperament test will have to repeat the entire test at a later trial to earn a Schutzhund title.

Schutzhund trained dogs – what can they do?

Schutzhund trained dogs can excel in many jobs. They can be good at herding, personal protection, search and rescue, and are often used as service dogs.

However, these dogs are the perfect candidates for police or military work. They have a great foundation and only need a bit of additional training to be ready for active police duty.

In fact, German commands are often used for police work in the USA since many police dogs have been trained in Schutzhund first.

Also, some of the dogs are imported from Germany – especially German Shepherds. Here are a few basic commands in German: 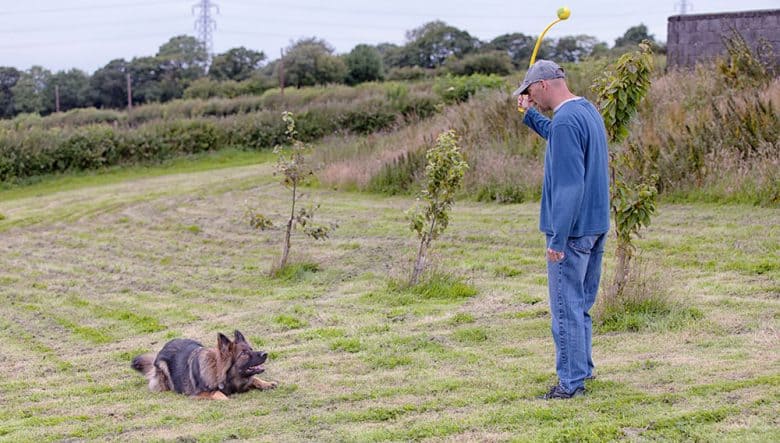 In addition to the numerous working capabilities, a Schutzhund trained dog is also a well-trained companion dog at home.

These dogs are generally calm but also alert and eager to protect if necessary. They are courageous but also good with children.

How to get started in Schutzhund?

If you are interested in Schutzhund, the best starting point would be to locate Schutzhund clubs near you and join one of them.

This can also be a great way to reduce Schutzhund training costs because clubs often charge an annual membership fee and provide training for free.

The price of the membership fee can vary from one club to another. It is usually between $500 and $1,000 per year, while the group training sessions at the clubs are held 2-3 times per week.

Of course, you could choose to pay for Schutzhund training sessions instead of the annual fee. Group sessions are from $15 to $40 per session, while private sessions can cost anywhere from $70 to $350.

All in all, the total cost of Schutzhund training that will get your dog ready for competition is around $4,000 on average.

While all dogs can participate in Schutzhund trials, protection breeds are simply better at it. Choosing a puppy for Schutzhund is not important if you are interested in the sport as a recreational activity.

However, if you want your dog to be competitive, consider more suitable breeds like the German Shepherd, Belgian Malinois, Rottweiler, or Doberman. The puppy’s bloodline is also important to take into account.

Find a Schutzhund club that suits your lifestyle – It is best to check out local clubs and find more about them before you even get your dog. A good Schutzhund club will help you learn Schutzhund if you are a beginner.

Choose a good mentor – As a Schutzhund beginner, it is important to choose a mentor that fits your style and shares the same values.

Know your dog – Knowing your dog will help you understand how to handle him better and how you can make this activity more enjoyable for both of you. You should be aware of his potential triggers and know what treats he likes best so you can use them for reinforcement. 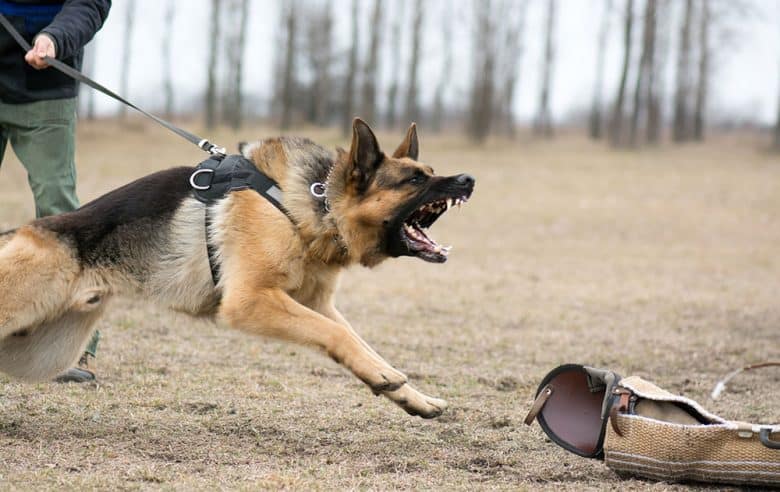 Some people have false beliefs about the nature of Schutzhund and how it may affect a dog’s temperament:

These are a few common misconceptions about Schutzhund that have no basis in reality. Dogs trained in Schutzhund are not aggressive, dangerous, or more likely to bite or self-deploy.

In fact, these dogs are so well-trained that they are less likely to be aggressive or attack without reason than untrained or poorly trained dogs.

Some also think that Schutzhund training is cruel or that dogs don’t enjoy it. Once again, this is far from the truth since dogs enjoy all the activities that Schutzhund entails.

Additionally, training methods are focused on positive reinforcement and are in no way cruel to the dog.

A Schutzhund dog can be a great family dog. These dogs are disciplined, work well under pressure, and handle any kind of noise, so they are good around kids.

The sport can also strengthen the bond between you and your dog.

Should I start Schutzhund training?

As we said before, Schutzhund is fun and has many benefits. Your dog will become more disciplined, hone his scent work, and improve his physical and mental shape.

However, Schutzhund also requires a lot of dedication, patience, and effort, so make sure that you are ready for it.

If you have additional questions or want to share your experience with Schutzhund, leave a message in the comments section.