The Chipin dog (a.k.a the Pinhuahua or Minchi) is an upbeat, compact cutie with smarts and looks to kill– the full package.

The Chipin is a crossbreed, a mix of two tiny purebred dogs: the Chihuahua and miniature pinscher.

These intelligent pups are not only loving and fun; they also make excellent guard dogs– don’t believe it? Read on to find out more about this lovable breed!

Origin: Where does the Chipin dog come from?

Designer breeders began creating the Chipin in the early 2000s, most likely in North America.

While we’re unsure of this breed’s purpose or goal, it is a fun, adorable, intelligent, and loyal pup. So, breeders may have done something right here!

The Chipin is a mix between two toy-to-small sized breeds: the Chihuahua and the Miniature Pinscher.

Chihuahuas may have originated in Mexico, as they’re named after a Mexican state. One’s thing’s for sure: Chihuahuas are an ancient breed!

These teenie pups can be long or short-haired. Their personalities match their adorable looks: curious, fun, but also snappy and overly brave. They’re also needy for affection.

The AKC registers these fearless cuties in the toy group, and they rank 33 in breed popularity.

At only 6 pounds and 5-10 inches tall, they earn their nickname “purse dogs.”

They have an impressive 12-20 year lifespan.

Miniature Pinschers originated in Germany, where they were initially bred as watchdogs. They’re also known as Zwergpinschers or MinPins.

The AKC recognizes MinPins in both the Toy group and the Companion group. They’re playful, sweet dogs who need constant affection.

They’re tiny like the Chihuahua, standing at only 10-12 inches tall and weigh 8-10 pounds.

Despite a common misconception, these dogs are not bred-down Doberman Pinschers; they are a separate breed entirely. They most likely find their origins in Dachshund and Italian Greyhound bloodlines.

The Miniature Pinscher has a 12-16 year lifespan.

Although these pups may have different appearances as a crossbreed, they are most often characterized by a short, smooth coat with a small, round head, big ears, and a tiny pointed muzzle.

Since both parents are toy-to-small sized, Chipins have small bodies with lean legs and small paws.

They also tend to have that dark face mask like the Min Pin, with dark brown eyes and black or brown noses.

How big do Chipins get?

These dogs are toy to small in size, weighing 5-18 pounds, standing 7-12 inches tall. Females tend to be smaller than males.

The Chipin Coat and Colors

Their coats are short to medium in length, straight and smooth. While most tend to have short coats, they can be long-haired because of Chihuahua parent coat variety.

Possible Chipin coat colors are black, chocolate, golden, and cream. They’re usually two colors like golden black or black and tan, but they can also be a mixture.

Just because they’re small doesn’t mean their personalities are! Chipins have giant hearts in their tiny chests and a lot of love and affection to give– and receive (they demand constant attention).

They are super energetic dogs, which can be quite fun. They’re also extremely intelligent, curious, and alert.

Yes, they can be. You can blame this on the Chihuahua parent’s bad reputation for being one of the most aggressive well-known breeds.

Chipins tend to be overly protective and territorial of their owners, making having guests over a bit difficult. They tend to be yappy little “guard dogs.”

These dogs are known to be wary of strangers, which may be to the point of aggression. Take caution when having guests or bringing new people around your pup.

The Chipin may be small, but their loud, shrill barks will be sure to keep you safe. These traits may come from the combination of the Chihuahua’s yappy nature and the innate protectiveness of the MinPin.

They prefer adults or older children who can be gentle. They’re not great but tolerant of other pets. That said, they’re better with cats than other dogs, but they would prefer to be the only pet in the household.

Early socialization is the key to a well-behaved, friendly Chipin. They’re prone to social anxiety if they don’t get the attention and love to require.

So, they would do best in a household where at least one person could be home with them most of the time– or at least with someone who could bring their pup to work (ha!).

These little dogs also tend to have a stubborn streak. They need consistent, firm training early on, or you run the risk of having a Chipin with “Small Dog Syndrome.”

When it comes to obedience training, start early and make the sessions short. Since these dogs are so intelligent, they tend to become bored when given monotonous tasks for long periods every day.

How to Care for a Chipin dog

Your Chipin has the best chance of living a healthy life with regular vet checkups and keeping an eye on them– their tiny stature and extreme curiosity makes them more accident-prone.

It’s also important to note that they aren’t suited for extreme weather, hot or cold.

Check out this adorable Chipin crew in coats and booties playing for the first time in the snow:

You should check your Chipin’s ears regularly. Their sharp, pointed ears make them susceptible to debris collecting inside, which can lead to infection.

You should use cotton balls– never cotton swabs– and dog-specific ear solutions (such as Pro-Ear).

Chipins are not hypoallergenic, and they shed regularly. But fear not, for like their parents, they have very low-maintenance coats!

Their low-maintenance grooming needs might make them suitable for first-time pet owners.

Bathing is recommended at least once a month or as needed. Use a dog-specific shampoo that’s also easy on the skin (aloe or oatmeal).

Over-bathing will affect the natural oils in their coat and dry out your pup’s skin, so be wary of this! This can cause various skin issues.

Brushing is only needed a few times a week using a stiff bristle brush, and regular nail trims (1-2 times per month) are also necessary.

The frequency of nail trims will depend on your pup’s activity level, as their nails will also wear themselves down with exercise.

You should brush their teeth daily. Small breeds are prone to dental issues which may be linked to more serious underlying diseases such as heart disease.

Invest in some dog-specific toothpaste and enjoy brushing fido’s teeth at night before bed while you brush your own!

Most dogs hate this process, but a good tactic to avoid the anxiety and struggle is to mix up the time of day you brush your pup’s teeth so they don’t expect it or have time to over-react– let them know it can be a fun, easy experience!

Walking the Dog: exercise for your Chipin

Chipins need at least 45 minutes of daily exercise: walking, running, hiking. These dogs have a tendency to chase because of their rat-chasing ancestors.

The key is to keep your Chipin active to avoid behavioral issues such as jumping, chewing, or barking or “talking back.”

They also need more frequent potty breaks due to their small size.

Chipins should eat ½ to 1 cup per day of diet formulated for small breeds with high energy.

Stick to a regular feeding schedule to avoid obesity. Your puppy’s diet needs will change as he grows, so consult your veterinarian for all stages of life.

What is the life expectancy of a Min Pin Chihuahua mix?

Since both parents have decent life expectancies, the Chipin has a 10-16 year lifespan.

They might inherit some problems from either Chihuahua or Min Pin parent:

Zack the Chipin woke his owner one night with his barking when a man in the neighborhood had been stabbed. After this, the guard dog habits in the Chipin became more prominent.

Chipins are often regarded as being “full of themselves”– but, we all know some people like this, and yet we love them anyway!

Where to buy a Chipin: breeders and rescues 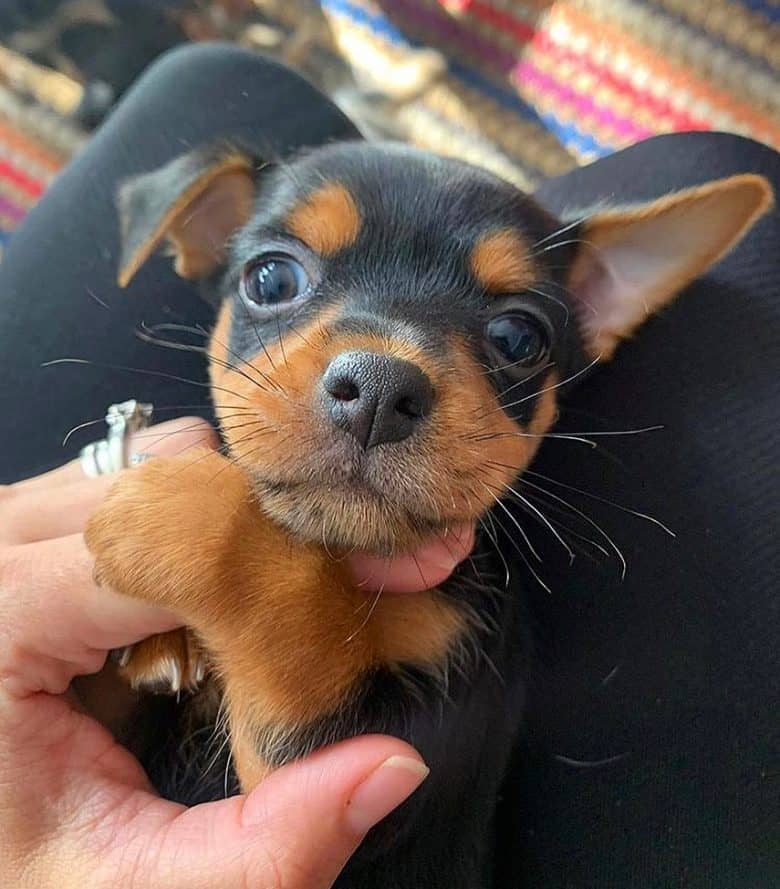 I haven’t had any luck finding a reputable Chipin breeder– no surprise since the breed is relatively new.

Many designer breed dogs end up in shelters because of the “mixed breed” stigma.

You can find the Chihuahua Miniature Pinscher mix at rescues that specialize in either breed, along with other mixes., like the chiweenie or the pomchi.

This is a cross between a Chihuahua and a Dachshund. They’re loyal, fun, and super smart.

They’re 5-10 pounds and 6-10 inches, making them another excellent apartment-dwelling breed choice! They, too, have stubborn and yappy tendencies but are also very loving and affectionate.

This fluffy firecracker is a mix between a Chihuahua and a Pomeranian. They’re 4-12 pounds and have an even longer life expectancy at 12-18 years.

Their temperaments are quite similar to the Chipin; although, they seem to have fewer health problems.

The Chipin: an all in one

If creating a more well-behaved Chihuahua type of breed was their goal, I’d say designer breeders hit the nail on the head.

The Chipin seems to be an all-around winner in the crossbreed world: a loving, playful, adorable guard dog with low-maintenance grooming needs who can fit into a house or apartment with ease.