Home » Breeds » What Dogs Look Like Pit Bulls But Aren’t the Same Breed?

Pit Bulls are known for their square faces, muscular builds, cropped ears, and trademark “Pit smile.” These dogs have a reputation for being aggressive and have been banned in several countries.

With the proper training, however, they can be a very loyal and loving breed of dog. Pit Bulls not only make good companions but are commonly used as service dogs, police dogs, and even therapy dogs. 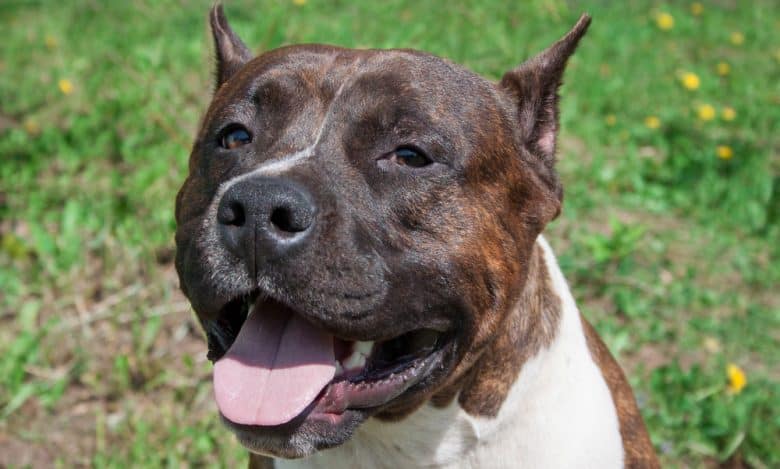 But that doesn’t stop other people from discriminating against the Pitties.

Let’s learn more about the Pit Bull and the dog breeds with similar looks and temperament to clear up some confusion.

Can You Identify a Pit Bull Just by Looking?

To assess whether a dog is a Pit Bull (American Pit Bull Terrier) breed, the following should be identified. Firstly, look at the size ratios of the dog.

Pit Bulls are two and a half feet tall at the shoulder or shorter and weigh between 25 and 60 pounds (11 and 27 kg) depending on the individual and gender.

They also have narrow hips and muscular shoulders. Some are as wide across the chest as they are tall to the shoulder. Secondly, look at the dog’s coat.

The only thing necessary to observe on the coat is the length and texture. A Pit Bull’s hair rarely grows longer except at the end of their tails, where it is very coarse.

Thirdly, look at the dog’s head and neck. The Pit Bull’s head is very wide from ear to ear, across the brow, and from cheek to cheek.

Even in relation to the breed’s bearlike shoulders, the head is very wide—the muzzle narrows, but only slightly.

Check out this adorable video of Pit Bulls being funny and cute:

Do Purebred Pit Bulls Even Exist?

Firstly, the American Pit Bull Terrier, or APBT for short, is not recognized by the American Kennel Club (AKC).

However, these dogs are recognized as a breed by the United Kennel Club (UKC) and the American Dog Breeders Association (ADBA).

There are four different types of Pit Bulls, each with a different breed standard. These bully breeds are:

Small Dogs that are Mistaken for Pit Bulls

Some Terriers may resemble Pit Bulls in terms of their looks and temperaments and get discriminated against.

Let’s take a closer look at some of these pups to understand better and recognize each of them.

Patterdale Terriers are commonly mistaken for Pit Bulls because they share various physical traits. These include their athletic and solid frames, v-shaped ears, and high-carrying tails with no curl.

However, if Pit Bulls are believed to be aggressive, Patterdales are not. Instead, they are much friendlier but do have a strong prey drive.

A variety of muscular, strong dogs with short coats are often mistaken for Pit Bulls, while other intimidating breeds share their guard dog tendencies.

Here is a list of some medium-sized dog breeds that are often mistaken for Pit Bulls:

Of all breeds listed, this one resembles the Pit Bull the least. This is a distinct breed from the Pit Bull because of its triangular eyes and oval-shaped head.

However, the Bull Terrier is said to share the stubbornness of the Pit Bull.

The Olde English Bulldogge breed was created from a mix of the English Bulldog, American Bulldog, Bull Mastiff, and the American Pit Bull Terrier, which probably accounts for why it is often mistaken for a Pit Bull.

These dogs are also less aggressive compared to the Pit Bull.

Black Mouth Curs look nothing like Pit Bulls. The body is much sleeker in comparison to the Pit Bull’s sturdy frame.

Moreover, their mouths and noses are a deep brown or black shade. Despite this, people have mistakenly reported this breed to authorities for being a Pit Bull.

The Rottweiler’s menacing appearance is probably why they are sometimes mistaken for Pit Bulls.

Like the Pit Bull, these dogs have a strong, muscular frame that means they are intimidating for any potential trespasser, making them excellent guard dogs. But, like Pit Bulls, they are independent and confident.

The Vizsla is yet another dog that does not resemble the Pit Bull, but that doesn’t stop people from associating the two.

Differences in their physical features include long-leggedness, lean statures, and long ears that hang down low.

English Bulldogs are stocky, powerful dogs with a surprisingly broad head and a massive set of jaws, likely why they are mistaken for the Pit Bull.

These dogs, which originally hail from England, are generally more muscular than Pit Bulls, with slightly shorter legs. They also have a different, gentler temperament to the usual Pit Bull.

While some people may mistakenly refer to these dogs as giant Pit Bulls, they are different breeds altogether.

Like the Pit Bull, the American Bulldog is a robust, athletic dog with short hair and is one of the most similar breeds to the Pit Bull in both looks and temperament.

They also have high energy levels and need plenty of training but make for excellent watchdogs. American Pit Bulls were used in the breeding of this canine to create healthier lineages.

Boxers have a similar temperament to Pit Bulls as they are playful, energetic, and friendly. However, they tend to have a slightly shorter life span than Pit Bulls due to heart and breathing complications.

Unlike many larger breeds, the Presa Canario is aware of its robust size, making the breed potentially aggressive at times.

The Pit Bull, on the other hand, is significantly smaller and friendlier. The Presa Canario is said to resemble the Pit Bull due to its firm stance and powerful body. Moreover, the dogs have a similar life expectancy of 10 to 13 years.

Furthermore, the Bullmastiff is typically larger than the Pit Bull. Finally, this breed is highly intuitive in terms of training, which makes training them less demanding compared to the Pit Bull.

to protect farmers from any large animals and trespassing strangers while assisting in herding and protecting flocks.

These working dogs are protective of their family members but are not usually aggressive dogs unless provoked. Like the Pit Bull, they do well with children and host a gentle soul under their fierce appearance.

The Rhodesian Ridgeback breed usually weighs within the same range as the Pit Bull, although they are taller, around 24 to 27 inches (61 to 69 cm).

They typically have wheaten-colored coats and are much skinnier than the Pit Bull. Additionally, these dogs are good with children and display lots of affection, making them a fantastic family pet.

Alapaha Blue Bulldogs are loyal and loving, as are most of the Pit Bull breeds. Moreover, they are also known to be good with children.

This breed, though, has to be well socialized to prevent aggression. This breed is an ancestor of the American Pit Bull Terrier, which is likely why people may be confused between the two.

Like the Pit Bull, the Ambullneo Mastiff has a broad skull, short muzzle, and strong jaws. They also have a thick neck, and broad shoulders, and chest.

These dogs love to please but are pretty sensitive, especially to harsh or negative treatment. Early socialization is a must for these dogs that will do anything to protect their family.

This breed boasts a massive build as opposed to the shorter, stockier Pit Bull. This big dog’s head is also much broader than the Pit Bull’s square-shaped head.

Finally, Dogues can weigh up to 110 pounds (50 kg), making them much heavier than a Pitty. Like the Pit Bull, the Dogue de Bordeaux has a history of being used in the abhorrent practice of bull-baiting.

If you compare the size of any Cane Corso to a Pit Bull, you will find that the former is significantly larger and tens to have a saggier face.

These dogs, also known as Italian Mastiffs, are at least 10 pounds heavier than Pit Bulls. The only similarities are their muscular builds and their short-cropped ears.

Unfortunately, these dogs, like the Pit Bull, don’t have a favorable reputation and are often associated with fighting dogs.

As the name suggests, these dogs hail from Argentina, are also much larger than Pit Bulls with a pure white coat.

Originating from Brazil, the Fila Brasileiro is a large working dog and a game hunting dog.

They have large heads, and their coat can be brindle or fawn in color, which may be the reason why people mistake them for a Pit Bull.

This type of dog is loyal to their owners but don’t do so well with little kids and other dogs.

Bred to be working dogs, Great Swiss Mountain dogs are strong and agile.

Although there is no resemblance at all, Swissies are sometimes mistaken for Pit Bulls. They are very good with children and are even-tempered.

Great Swiss Mountain dogs are also much more prominent than Pitties. Their height is between 25 to 28 inches, and they weigh 115 to 140 pounds when they’re fully grown.

Are you still unsure about how to correctly identify your Pit Bull and want to know more about DNA testing? Or perhaps you still have some questions about breed legislation. Let’s get your questions answered below:

Where do you get a DNA test for a dog, and how much do they cost?

Several places offer dog DNA tests, and the prices tend to vary, although they can potentially be quite expensive. Tests can be bought online from different DNA testing websites or other pet supply providers like Chewy, Target, and Petco.

Some of the popular at-home breed tests are:

Generally speaking, price ranges for DNA tests tend to vary from $40 to $300.

What is Breed Neutral Legislation?

Unfortunately, the Pit Bull dog breed is subjected to many breed stereotypes, leading to discriminatory bans against these breeds in several cities and towns. This is known as Breed-specific legislation.

On the other hand, Breed neutral legislation addresses all potentially dangerous dogs regardless of their appearance or breed. It is implemented in more than 95% of cities and towns across the U.S.

It uses an individual dog’s history of problematic behavior and irresponsible ownership as the principal factors for regulation.

Breed neutral legislation impacts all dog owners, hold them accountable for their dog’s behavior and encourages responsible ownership of all dogs.

Which Dog that Looks Like a Pit Bull is for You?

Are Pit Bulls banned in your town, but do you want a dog that shares similar strong, muscular physical characteristics and the friendly, loyal temperament of the Pit Bull type?

Then one of the above breeds may be suitable for your home. Many of these breeds boast square jawlines, stocky bodies, and muscular statures. Or you may want to check out Pit Bull Mixes.

Like Pit Bulls, some dog breeds listed above can also be good with kids while being loyal, attentive watchdogs; however, many of these breeds are only recommended for experienced owners who can provide them with dedicated training and socialization.

A first-time owner may struggle to control these strong, often stubborn, canines and might do better with a Labrador, German Shepherd, Golden Retriever, or a Great Dane.

Do you have any of the above breeds at home? Let us know more about your dog in the comments below.

Further reading: Everything you need to know about Pit Bulls