The Alaskan Malamute is a fixture in many Inuit families as a heavy freight dog as well as a family companion.

They are one of the oldest breeds in the world. Not surprising, there was a divergence which introduced new color into the pedigree.

Today, you can find Mals in many colors, from red to blue and everything in between. Let’s break down the Alaskan Malamute’s coat and markings.

The Alaskan Malamute has a dense undercoat and an outer coat. The undercoat is the primary color of the dog. This can be red, grey, brown, white, even black.

The outer coat is made up of guard hairs. It can exhibit patterns which give the Malamute their distinctive markings. This includes trimmings around the ears, legs, and the back of their skulls.

The different colors of an Alaskan Malamute

Malamutes are a colorful breed with many interesting markings.

White collars, stars, and blazes are considered attractive, like a beauty mark. Symmetry is preferred because of a superstition that symmetrically colored dogs run straighter.

Piebald and uneven splashes of colors are undesirable and will be rejected from the show ring.

Black and White puppies are born with muddy white markings on their faces. They can be confused for a Dark Agouti, but true Blacks have no brownish tinges in its coat.

The black fur often extends down their legs. Full masks are not uncommon in Black and Whites.

Puppies are born with very distinctive and crisp facial markings. These marks will fade as they age. Their coats will be grey with heavy black pigmentation.

The difference between Grey and Silver is the amount of black the dog has. Silvers have very minimal black fur. These puppies are usually born white and cream.

You will not find any Brown and White Malamutes as brown falls under this category.

Red and White Malamutes have liver or brown pigmented noses. They are the only color that are allowed to have noses which aren’t black. Their eyes are often amber, lighter than the generic brown.

The red of their coats can range from light orange to a dark mahogany. They will not have any blacks in their coats.

They can also be further categorized as Red Agouti or Red Sable. The defining factor for Sables is that they have black in their coat.

Watch as Cougar, the Red and White Malamute grow up:

Blues are characterized by the lack of black in their coats or pigmented skin. Their eye rims, noses, and even lips will have a grey pigmentation instead.

The only solid color that’s allowed. White Malamutes might have hints of cream around their ears and back. Their noses should be black and their eyes should be brown.

Sables can come in any color available to the Malamute. They are defined with an orange or red undercoat with dark guard hairs. Their noses will always be black.

If a Grey and White Malamute exhibit an undercoat that isn’t white, it will be classified as a Sable and White.

However, most of the time, if a dog has a distinct reddish or cream undercoat, it will be registered as Sable.

You can also come across a Seal Sable, which is a dog that exhibits the Seal pattern but has an orangey undercoat instead of the usual white or grey.

Malamutes not only come in all colors, but they also have various markings that make them stand out from one another. On top of that, they can also exhibit specific patterns.

The original Mals were Agouti, a pattern that resembles a wolf’s coloring. It is also regarded as a wild pattern. This creates individual fur to have three colors – a dark tip, a cream middle, and a base color at the end.

In Red Agoutis, the tip would be dark red and the base might be red as well. Black or Grey Agoutis often have black tips and grey bases, although it can be white.

Very dark puppies born without any clearly defined markings on their faces are often Agouti.

Their muddy coloring is sometimes described as sooty, or grizzly.

They are usually born with salt and pepper masks, but these can fade to muddy goggles as they grow up and are easily mistaken for Dark Grey and White Malamutes.

What sets them apart is a light right of color around their eyes which is outlined by a darker shade.

Seals have two bands instead of the Agouti’s three. They are characterized by their light undercoats and black guard hair. They also have a clear white band on their chests.

They are often born with large white eye spots. Seals sometimes develop white tips into their adulthood. This considerably lightens their entire look.

While they might have goggles or eyeshadow, they will not have the full masks that Agoutis or Black and Whites have.

Inverted Seals also exist, whereby the top band of the fur is white and the base is dark.

All Malamutes except White Malamutes have a Cap. This refers to the crown of color on their heads which ends in a point in the middle of their faces. It kinda looks like a Widow’s Peak.

Some Malamutes don’t have any markings on their face. This clean white face is called an Open Face.

When there’s a dark line running down the middle of a Mal’s face, it’s referred to as a Bar.

Goggles are markings around the eyes that extend into the cap.

Markings around the eyes that do not extend into the cap.

A white marking inside the cap is described as a Star.

A vertical horizontal stripe that divides their cap into two distinct sections.

When a Malamute exhibits Bars and Goggles, it creates a Full Mask

These faces are completely black and you cannot make out any distinct Cap, Bars, or Goggles.

A Necklace that doesn’t meet in the middle and often resembles the wings of an eagle.

Malamute puppies rarely keep the coat they were born with. Their colors will change as they mature. A puppy born with a mask may lose it. Red and White puppies might turn Sable as their guard hair grows in.

When puppies are registered with a kennel club, they are registered based on their puppy colors. Don’t be surprised when your White Mal grows up into a Cream, Piebald, or Silver.

Can Alaskan Malamutes be all white?

Yes, this is the only sold color that Malamutes can have. All Mals should have white markings on their legs, underbelly, feet, and face. This is why all colour classifications have the words “and white”.

What color are Malamute’s eyes? 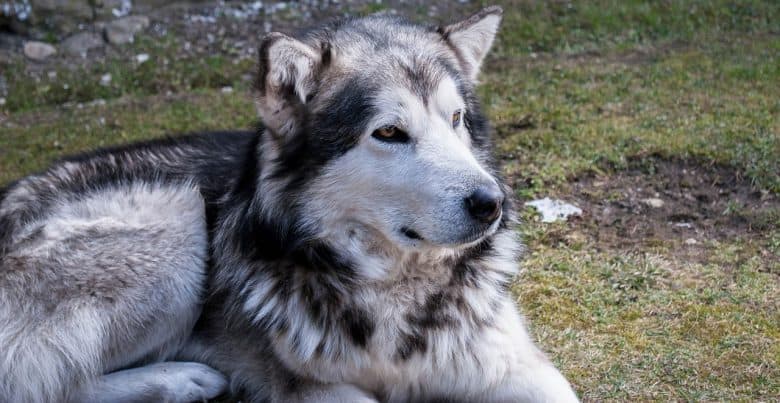 A Mal’s eyes should always be brown. Any time a Malamute exhibits blue eyes, it’s a sign of crossbreeding.

Malamute mixes can exhibit interesting traits. An Alusky can have different colored eyes like a Husky. The Aussie Malamute will most likely have a Merle coloring.

Why is there a Long Coated or Wooly Alaskan Malamute?

According to the AKC, Malamutes should adhere to a certain size and should not have excessively long guard hairs.

Standard Alaskan Malamutes should have a clean outline without any obvious feathering. Their undercoat is described as wooly, but it should be covered by medium-length guard hairs.

Woolies are Malamutes with extremely long and fluffy coats. This is due to a recessive gene that all Malamutes carry. Their guard hairs can grow up to 12 inches (30 cm) long.

You’ll be able to tell from a litter which one is going to be a Wooly by the “halo” effect caused by longer guard hairs.

A Wooly Malamute will need extra care and grooming. A Malamute with the correct coat-type will repel snow naturally.

Incorrect coats will trap dead hair, snow, and ice. Since they are working snow dogs, this coat is impractical.

It is believed that Woolies are sweeter because only the particularly sweet ones were kept as pets.

While a reputable breeder might produce a Wooly or Giant Alaskan Malamutes occasionally, they shouldn’t be breeding specifically for those traits.

Some say that there’s a distinction between Long Coated and Wooly Malamutes but others argue that it’s one and the same.

Some say that Woolies tend to look like sheep, whereas Long Coated Malamutes have a Collie-like appearance.

Others insist that anytime a dog has feathering, it is considered a Wooly, even if their overall coat is standard-length.

Unlike standard Malamutes, the fur texture of a Wooly Mal’s feathering will be different from the rest of the body. It will be softer and wispier.

You shouldn’t get a dog based on appearance

Many people get a dog for its color, but that shouldn’t be the defining factor. It’s important to take into consideration their temperament and needs.

For instance, if you’re after an Agouti because it is wolf-like, you might want to check out dogs that look like wolves.

The Mal is not like your typical dog. These working dogs have various quirks and need lots of stimulation.