Home » Breeds » What are the Dogs that Look Like Wolves?

It might seem cool to have a wild animal as a pet, especially one as magnificent as the wolf. But it isn’t. They aren’t ideal pets due to their un-doglike behavior.

Even though you can’t have a wolf, you can still get a dog that looks like one. Some of them share a little DNA with wolves.

Read on to find out which breed is suitable for you.

Some studies suggest that dogs came from self-domesticated wolves. Friendlier and cuter wolves gained an advantage, curly fur or floppy ears appeared. This explains where there are also dogs that don’t look like wolves.

Over the years, people have created wolf-lookalikes through selective breeding. Some of that included crossbreeding with actual wolves.

Wolfdog hybrids laws: Can you keep one?

Even though some of these breeds have a little to no percentage of wolf in their genes, many states in America have outlawed wolfdogs.

Any wolfdogs found in those states will be immediately put down. So, please check your state laws before bringing one home.

There are laws in place to govern wolf hybrids because they don’t make good pets. Most are shy, pack animals that have high energy needs as well as high prey drive.

They need strong leadership and rarely thrive in households.

Also known as NAID, this stunning dog is easily mistaken for a wolf, but they’re just dogs.

Mostly used for SAR (search and rescue), service, and as therapy dogs, these large canines are gentle, good with kids, and even other pets. Given that they’re socialized early.

Take a look at this cheeky guy talking back to his owner:

The Native American Indian Dog is one of the very few that doesn’t shed. Also, it can tolerate hot climates.

Other than that, having this fido means spending a lot of memories together as they generally have a life expectancy of 14 to 19 years.

These dogs were used to play the direwolves on a popular show, Game of Thrones. Developed in the 1980s by Edwina Harrison, she mixed rescues with Siberian Huskies, Malamutes, and German Shepherds.

These pack-dwellers are people loving but can be dominant. They also tend to get bored or suffer from separation anxiety, which can cause destructive behavior.

Like with any arctic dog, it requires bi-weekly brushings, with bi-annual blowouts. They generally live 12 to 15 years.

Also known as Amerindian Malamutes, not much is known about this rare breed aside from a rumor that says they are Husky-Wolf hybrids.

Aside from their murky beginnings and unknown wolf content, these large dogs are very wolfish in both looks and behavior. They are challenging to train and require wide-open space for roaming.

These heavy shedders need to be brushed regularly and also blow out their coats twice a year.

There’s debate over whether there’s any wolf content in this large breed dog. But we know that the Alaskan Noble Companion Dog has Siberian Husky, German Shepherd, and Alaskan Malamute in its blood – which all sheds heavily.

Said to be affectionate and laid back, these large fidos can be antisocial towards strangers. They can also develop separation anxiety, especially if their needs are not met. They are highly active and need plenty of space.

Their average lifespan is around 14 years.

Alaskan Malamutes are the bigger and fluffier cousin of the Siberian Husky and have no wolf content. This huggable and gentle breed is great for active families, and is sometimes crossbred with Huskies to create an Alusky.

Malamutes were bred to pull sleds, but some were used for hunting polar bears. This means they need a lot of exercise.

These intelligent and lovable dogs can be tough to train and need strong leadership. And since they shed as much as any arctic dog, prepare your tools for grooming.

They are expected to live an average of 10 years.

Even non-dog-persons are familiar with the Siberian Husky, but there’s a variation most people might not know. They’re called Seppala Siberian Sleddog, which are descendants of “Balto,” the famous sled dog.

HUskies have zero wolf content and are medium- to large-sized dogs, with thick coats that blow out twice a year.

Almost everyone falls for their blue eyes, and some even have heterochromia where each eye has a different color. If you want one that really looks like a wolf, an Agouti Husky is a splitting image of a wolf.

Not only are they notorious escape artists with an independent streak, but they’re also vocal canines that you can teach to say “I love you”, among other things. This video will be proof of that: Also called Quimmiq, the Canadian Inuit Dog came to North America about 1,000 years ago from Siberia. Today, there’s only 300 left and they almost went extinct.

These dogs have low wolf content, and on top of that, they are unsuitable for hot climates. They love snow so much they’ll sleep in it, thanks to their very thick coats that shed heavily.

Aside from having low wolf content in their genes, they also require being at work. If you have other fur babies, you should know that this pooch loves humans but doesn’t tolerate other pets. 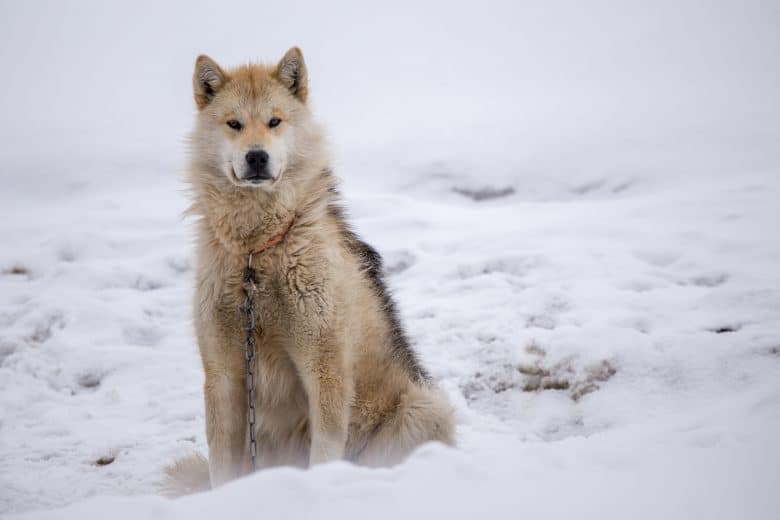 Some say they share the same genetics as the Canadian Eskimo, but others refute that claim. They also go by other names like Gronlandshunden and Greenland Husky.

This large spitz-type breed with very low wolf content, they are moderate shedders and love to roam. Gracing the police force since the 1900s, the GSD is a popular breed that was originally a shepherd.

They cast a wolfish profile with those erect ears and shaggy coat, but they have no wolf content and can be a gentle family dog. Although they tend to be protective, proper training will help with that.

German Shepherds are adaptable to both hot and cold climates, and with the change of seasons, they can shed a fair amount of fur. 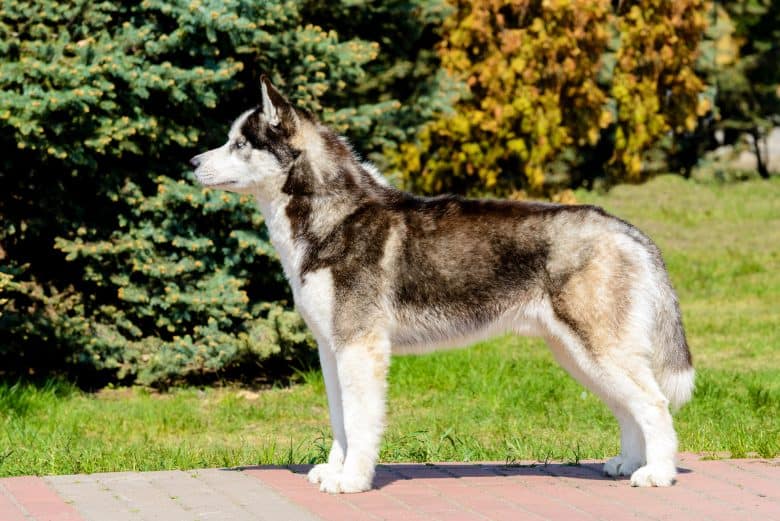 Hailing from Yakutian, Siberia, these arctic dogs have no wolf content, but give out that aura with their black and white coats, and their blue eyes.

They make great family pets, but they’re also used for sledding, hunting, as well as herding reindeers. Some were even employed in the postal service. This dog might look like a white wolf, but it’s as playful as a puppy. Despite their intimidating looks, there’s no wolf content in the Samoyed, and they love everyone, even strangers!

Their beautiful white coat requires lots of attention. Especially when the seasons change and they lose their undercoat.

They usually live up to 12 to 13 years and will stay young-hearted into their old age. 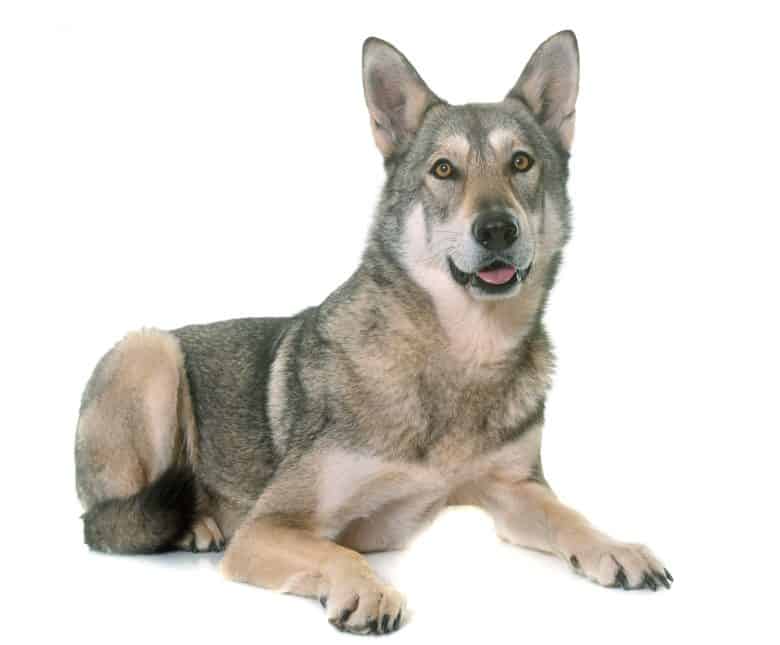 Developed in Europe by Leendert Saarloos in the 1930s, he wanted to create a working dog, but the Saarloos Wolfdog turned out too wolf-like.

While they are loving, they are also independent and need space to roam and require strong leadership. They’re one of the very few wolfdog hybrids recognized by the American Kennel Club (AKC). 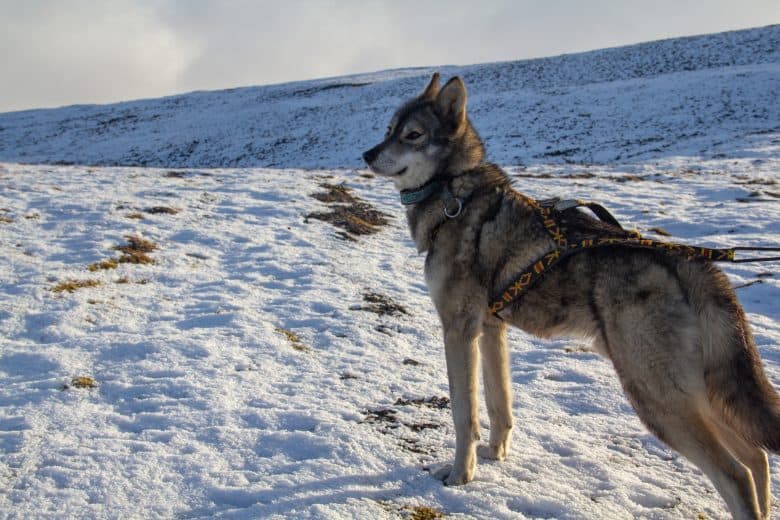 Tamaskans are a mix of the Utonagan and the Czechoslovakian Wolfdog, with some Malamute and Husky bloodlines. They have grey, tan, and black coats that make them look like a proper wolf, but this large breed has very low wolf content.

They’re good-natured and loyal dogs, that can even be around cats if properly socialized. When it comes to exercise, well-trained Tamaskans can go off-leash to satisfy their high energy levels. 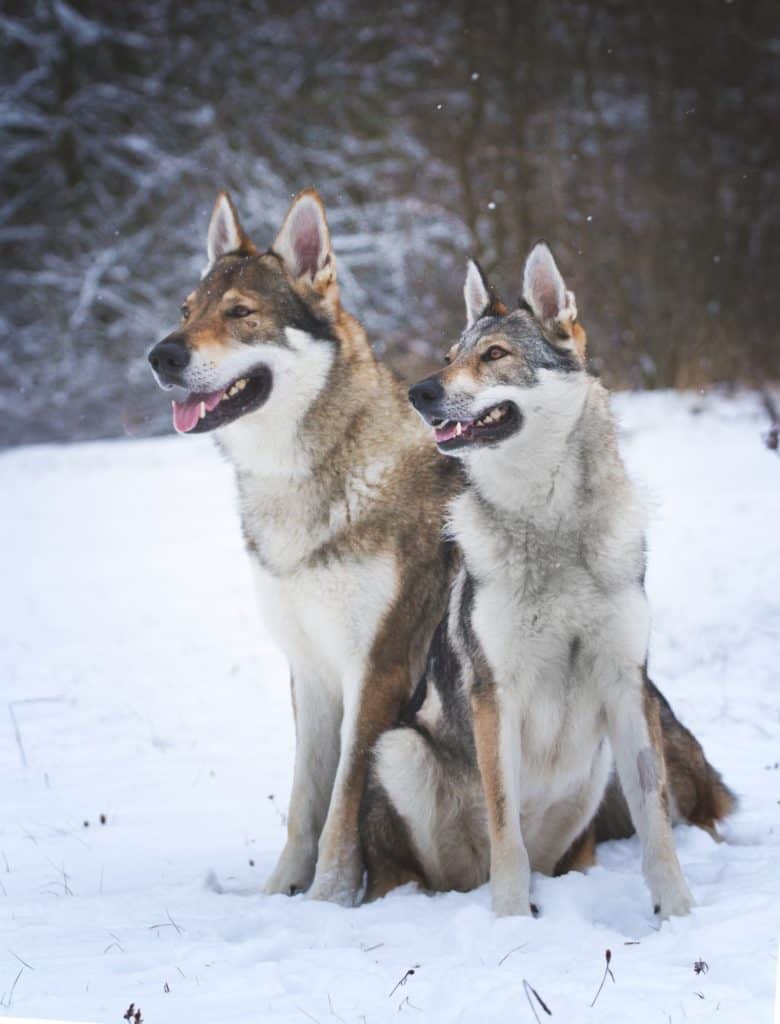 Also known as Czechloslovakian Vlcak, these dogs were specially developed for the Czech military for border patrol. They have low wolf content – 6.25% Carpathian wolf, and the rest is German Shepherd.

The Czechoslovakian Wolfdog is another hybrid that is recognized by the AKC.

Highly trainable and intelligent, these working dogs do not like repetitive tasks. And with the right leadership, you can have this fido around kids.

The distinctive quality between these two affectionate and intelligent dogs is their coat. The Belgian Tervuren has long, tan and black fur, while the Groenendael is solid black. 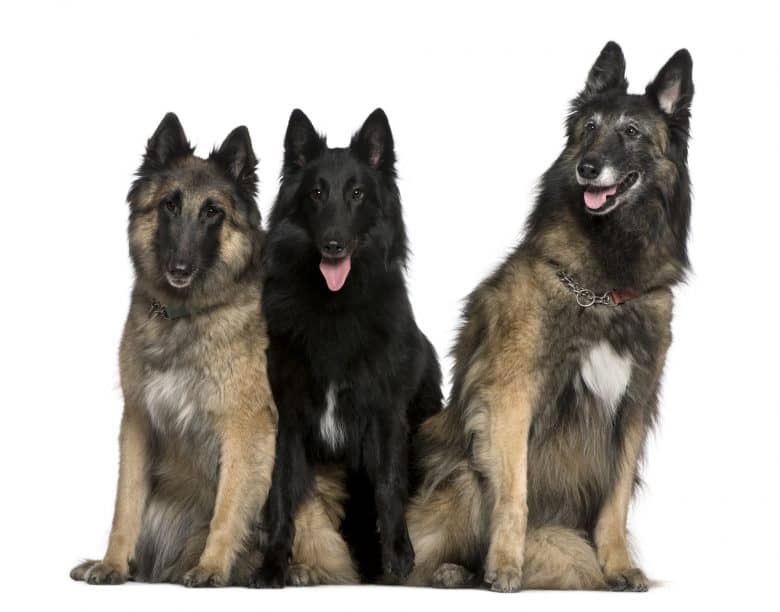 Both breeds started as herding dogs, but they now can be found in various working lines. They’re sometimes used in the military and the big screen.

They were even used to portray wolves in The Company of Wolves (1984). 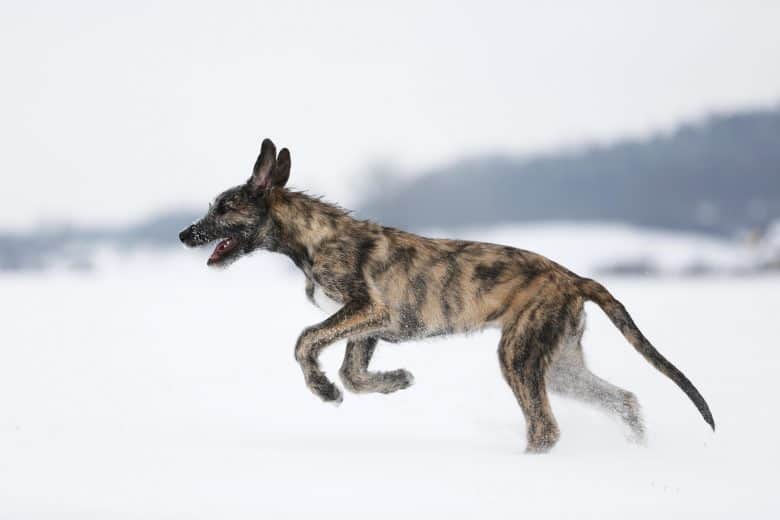 Irish Wolfhounds are giant dogs with shaggy, grey fur, and a goofy personality. They were initially used to defend villages from actual wolves.

They’re highly affectionate and unsuitable for vigorous exercise. Don’t be surprised when this oversized pup tried to sit on your lap – that’s how loving they are! 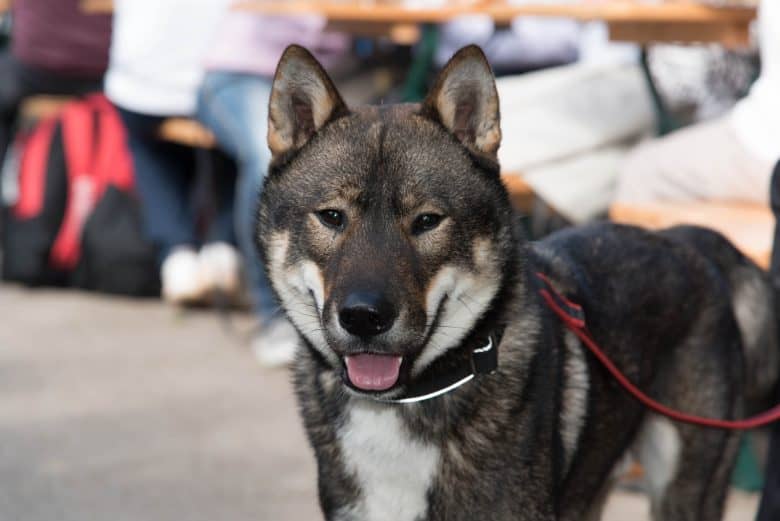 Shikokus share the same features as their Shiba Inu and Akita Inu cousins. All three are thought to resemble wolves, but only the Shikoku have wolf-like coloring.

Natural-born hunters, these medium-sized dogs have a high prey drive and were used to hunt boars.

If you prefer smaller breeds with wolf features and coloring, here are a few canines to consider.

All of them have zero wolf content and have distinct silver grey and tan coats that wolves have.

Endearingly called Poms, Pomeranians come in a rainbow of colors, and you may want to look for the wolf sable shade. 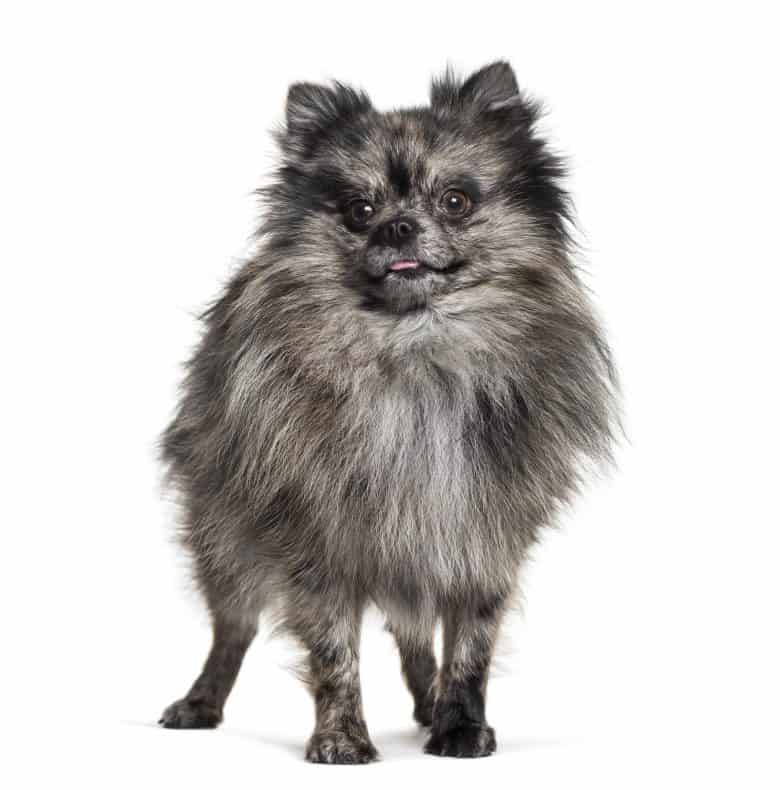 Strongly attached to one owner and not suited as a family pet., the Alaskan Klee Kai has wolfish tendencies – shy and wary of other people. However, they are playful and loyal to their favorite person.

The Pomsky is an adorable designer breed between Siberian Huskies and Pomeranians. Some dog fanciers think that it’s an unnatural breed because they are created with artificial insemination. 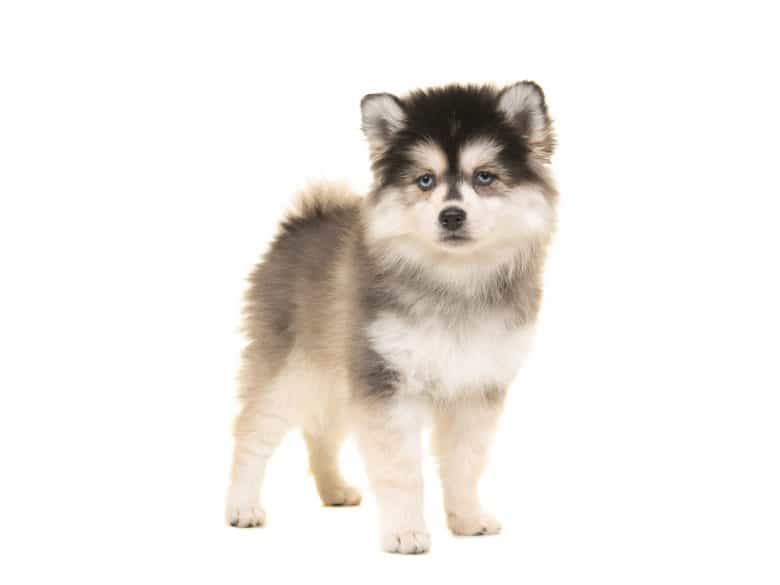 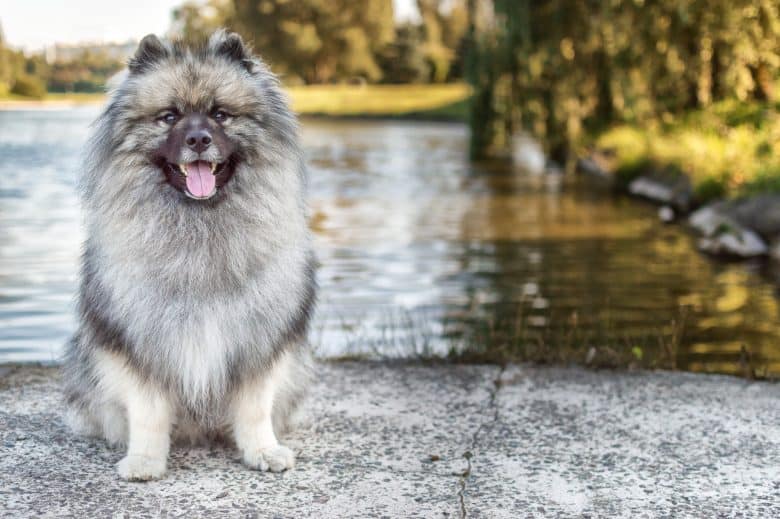 The Keeshond looks like oversized Pomeranians, with its dense, fluffy coat. They’re a medium-sized breed, weighing in at ‎35 to 45 lbs (16 to 20 kg). 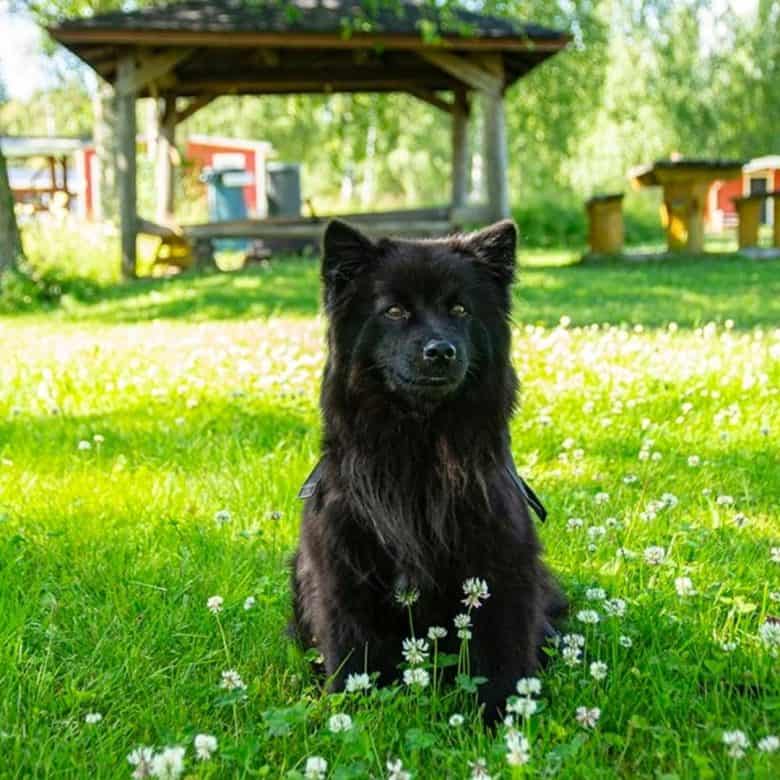 Thought to be descended from Arctic wolves, Swedish Lapphunds are lovely family companions. Usually eager to please, they can have a bit of a stubborn streak. 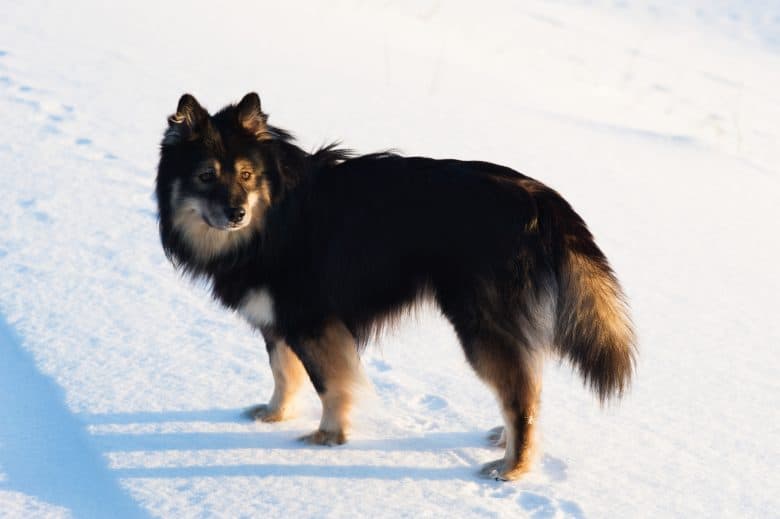 Finnish Lapphunds may look like an arctic sled dog, but they’re shepherd dogs with gentle souls. Since they look like tiny Huskies, they are often advertised misleadingly as Pomskies.

If you want wolf hybrids, don’t expect them to be like dogs

Some of the breeds listed here bear wolf-like traits – independent and wary of people. Even the Husky, which has no wolf content and simply looks like a wolf, can be quite standoffish.

Some owners are disappointed that they aren’t more loving. Consider the Samoyed, Malamute, or one of the smaller breeds if you want a family pet.

Taking on a hybrid means you’re prepared to take care of a high-maintenance canine friend. Most of them are larger than your average dog. They’re also highly active and can be very destructive.

Look at this white wolfdog playing with Link, a tiny-by-comparison Husky:

Should you get a dog that looks like a wolf?

Many of these dog breeds need strong leadership and have very high energy levels. If you want a friendly wolf buddy, you might be sorely disappointed.

Many of these breeds are aloof, loyal only to one, and stubborn – which doesn’t make them a good choice for first-time owners.

Other than that, wolf hybrids aren’t legal in most states, so that’s another factor to take into consideration.

These dogs that look like wolves might be your best bet if you want a fur buddy with wolfy traits. Ask yourself, though, which is more important: looks or temperament?

If it’s temperament, you’re better off choosing a different breed.

So which wolf-like dog breed caught your attention? Which one would you recommend for those who want to have a wolfy furball at home?

Tell us your thoughts by leaving a comment in the box below.