Home » Breeds » Will the Golden Pyrenees dog melt your heart?

Also called the Great Pytreiver, the Golden Pyrenees dog is a cross between a Golden Retriever and Great Pyrenees. This intelligent large breed is matched in size by its big personality.

This crossbreed is created by mixing two popular breeds that are known for their fierce loyalty and love for their human owners. Discover more about the Great Pyrenees Golden Retriever mix below. 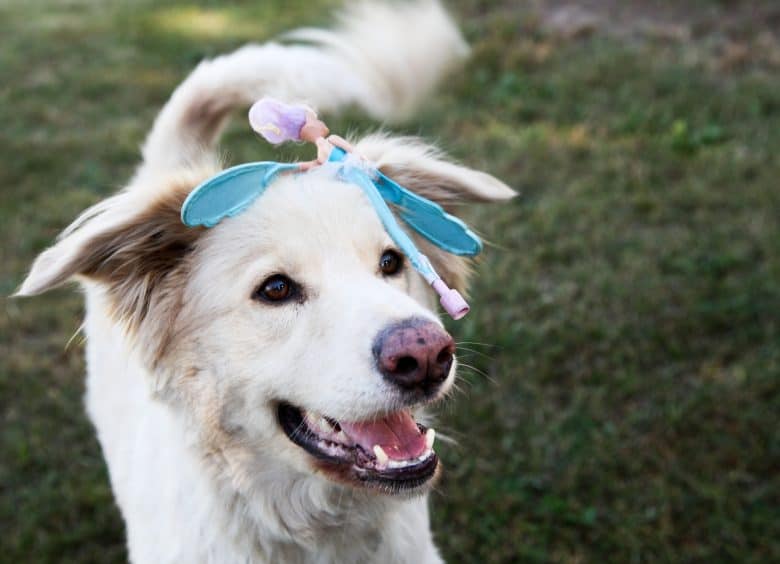 History of the Golden Pyrenees

As a designer dog breed, the Great Pyrenees Golden Retriever mix is not recognized by the American Kennel Club.

However, this majestic hybrid dog breed is acknowledged by the American Canine Hybrid Club, the Designer Breed Registry, the Designer Dogs Kennel Club, the Dog Registry of America as well as the International Designer Canine Registry.

In order to understand more about the Golden Pyrenees, it is necessary to take a closer look at the parents of this crossbreed.

With a history that dates all the way back to Bronze Age, the Great Pyrenees has staked its claim to fame as being a noble livestock guardian dog in the mountains of Europe.

Before the revolution, this breed resided in many a fantastic French Chateaux.

In fact, the Great Pyrenees was so popular amongst French nobility during the 17th century that King Louis XIV even named the breed as the national dog of France.

These dogs have worked for many years in the mountains of France helping farmers to protect their sheep from wolves.

Their low prey drive makes them a wonderful dog for guarding livestock as they tend not to go after the sheep themselves.

They also have a booming bark which they use to alert their owners to strangers.

Their thick coats also give them a great level of protection in the high altitudes in which they are accustomed to working.

The Great Pyrenees breed was also utilized by French soldiers in WWII who used this dogs as messengers to deliver important documents.

In the year 1933, this breed was officially recognized by the American Kennel Club. Beloved family pets, Golden Retrievers are loved around the world for their playful and affectionate nature.

As one of the most popular breeds of dog in the world, the ancestry of this golden breed can be traced back to the Border Country between England and Scotland, where Golden Retrievers were bred for hunting purposes.

Their soft-mouthed retrieval methods were loved by hunters as these dogs could retrieve fowl without causing any damage.

The Golden Retriever was developed by Lord Tweedmouth who used other Retriever breeds to develop the golden-haired beauty we know and love today.

Originally called Flatcoats, the breed was named Golden Retriever in 1920 and was recognized by that name by the American Kennel Club in 1925.

Today, along with being ideal family pets, Golden Retrievers are also used in guiding, tracking, and detection work. Generally larger than even its Retriever parent, the Golden Pyrenees has a deep chest, strong legs, and a regal stance.

The well-proportioned body is rectangular shaped with a rounded head featuring hanging pendant ears and a wide black nose.

The eyes of the Great Pyrenees Golden Retriever mix are typically dark in color and almond-shaped, featuring an alert expression.

The coat is thick and dense with feathering on the legs and tails and in addition, you will often see a ruff of fur around the neck of the Golden Pyrenees.

How big do Golden Pyrenees get?

If their diet is not controlled, the Golden Retriever Great Pyrenees mix can even reach an astonishing 220 pounds (100 kg)!

Generally, male Golden Pyrenees will be taller and heavier than their female counterparts, although this is not always the case.

Due to their giant size, Golden Pyrenees are not well suited to apartment living and will need a farm or house with large secure yard where they can expend their excess energy.

The coat of the Great Pyrenees Golden Retriever mix

The parent dogs of this crossbreed will have a great impact on the coat. If your Golden Pyrenees take after the Great Pyrenees parent their coat will be heavy and wool-like, while the Golden Retriever parent will contribute a silkier, smoother coat.

Either way, the coat of this crossbreed is going to require extra attention as the short undercoat combined with the longer topcoat has a tendency to matt and collect debris.

The Golden Pyrenees is not only gold as the name suggests and in fact can come in a variety of colors from a yellow cream to grey or black, white, or even brown. 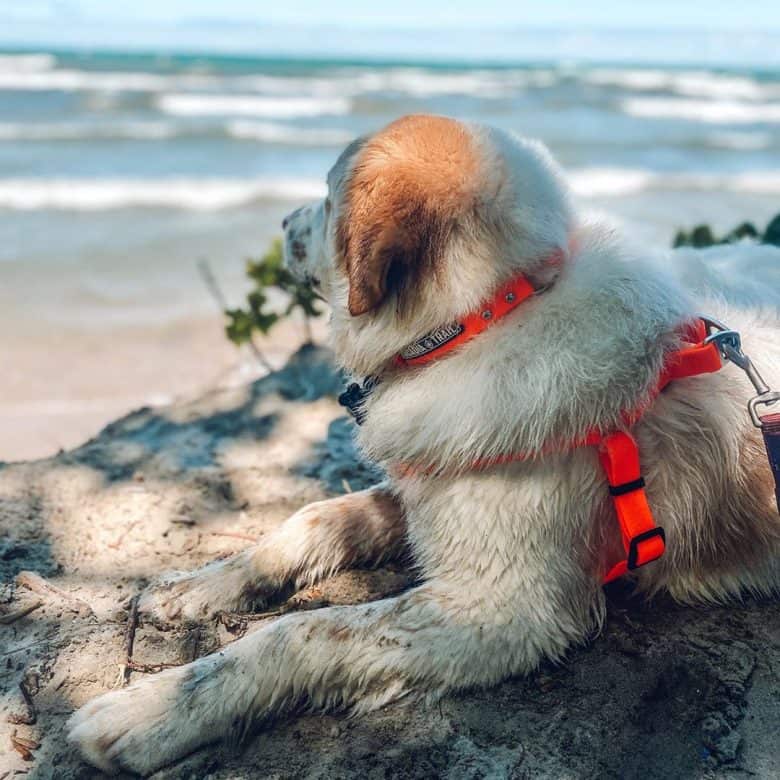 Crossing a Golden Retriever with a Great Pyrenees results in a playful and friendly dog. With both of these breeds having strong mothering instincts, this typically laid-back and relaxed loyal dog is also very protective of its family.

And while great watchdogs and protectors, the Golden Pyrenees does require a firm, calm leader who knows how to establish themselves as the alpha.

A first-time dog owner or gentle person may struggle to establish control over this dominant breed who will simply turn a deaf ear to a weak leader.

Consistent and regular training is also essential with the Golden Retriever Great Pyrenees mix, as is early socialization. Due to their parent’s history as a guard dog, this mix can be wary of strangers.

As a result, this breed can also benefit from doggy obedience school where they can interact with other dogs and humans.

One socialized, these dogs love to play so much that if you don’t show them the attention they need they may turn to destructive behavior.

Their boisterous nature may also mean that younger children or the elderly find the Golden Pyrenees too strong and overpowering.

Check out a playful Great Pyrenees Golden Retriever mix playing in the snow in this adorable video:

As a cross of two highly intelligent breeds of dog, the Golden Pyrenees requires an active lifestyle where their large size and high energy levels can be catered to.

Due to their history as a European mountain dog, this crossbreed is also better suited for colder environments.

The Golden Pyrenees needs daily exercise and lots of playtime. A vigorous hour or two of walking every day, along with some playtime at home will help to expend all that extra energy.

This dog will love an active family and will enjoy joining you on a jog or even for a swimming session.

However, due to their thick coat, be sure not to exercise this dog in the sun for an extended period of time.

It is best to walk your dog in the morning or afternoon when it is not too hot and you can find shade.

Also, take care to provide your dog with enough water during exercise.

A giant dog is going to require a lot of food! If you decide to get a Golden Retriever Pyrenees mix to call your own expect to be feeding your large dog at least four or five cups of kibble daily.

And while this may sound like a lot it’s also important not to overfeed this breed as the Golden Retriever parent can mean that your crossbreed is prone to overeating and obesity.

Be sure to keep an eye on how much snacks and treats you give your dog throughout the day and take this into account when working out their daily food intake.

Regular grooming and brushing are required to maintain the beautiful coat of your Pyrenees Retriever.

Daily brushing is required in the young stages of your dog’s life when it is still growing while adult dogs only require brushing once a week.

When brushing take care around sensitive areas such as the tail.

Your Golden Pyrenees will likely shed regularly but with a blow out twice a year in the changing of the seasons. During this time extra brushing may be required to prevent their double coat from matting.

Thining out the coat will also help to keep your pup cool in warmer weather.

Regular teeth cleaning and nail trimming are also a grooming requirement for all dogs but as the Golden Pyrenees have a dewclaw also pay close attention to this area as these have a tendency to get injured, irritated, or even ripped off.

The life expectancy of the Golden Pyrenees sits between 10 and 13 years. During their life, this breed may be prone to contracting some of the diseases known to affect their parent breeds.

Golden Retrievers are known for their likelihood to get cancer whilst they are also affected by heart disease, eye problems, hip, and joint dysplasia and Von Willebrand’s disease which is a bleeding disorder.

The Great Pyrenees on the other hand is also susceptible to hip dysplasia and bone cancer as well as luxated patellas and bloat.

Due to the thick fur of the Great Pyrenees Golden Retriever, this breed can also contract skin problems, particularly in environments that are hot and humid.

How much is a Golden Pyrenees puppy?

If you are looking for a Golden Pyrenees to call you own you can expect to pay anything between $500 and $5000.

The parent dogs, the health of the puppy, and the quality of the breeder will all affect the price of your depending on its quality or health status.

While a crossbreed dog is generally going to be less expensive than its purebred parents, the cost of the Golden Retriever and Great Pyrenees parents are going to impact the price of a puppy.

Both Golden Retrievers and Great Pyrenees cost between $500 to $5,000 and the lineage of the parent dogs is going to determine the cost of a Golden Pyrenees puppy. Here are some Golden Pyrenees breeders worth looking at:

If you are looking to adopt a Great Pyrenees Golden Retriever mix then try looking at rescue organizations that specialize in Great Pyrenees or other large breeds. Here are some to get you started:

Other breeds similar to the Golden Pyrenees

If you are looking for a dog similar to the Golden Retriever or Great Pyrenees you can also look at other guarding breeds such as the Anatolian Shepherd, Akbash or Maremma.

In addition, the Great Pyrenees is also often crossed with other breeds that are similar to Retrievers, such as collies or labradors, to create some adorable crossbreeds.

Should you get a Golden Retriever Great Pyrenees mix?

While not a great option for the elderly or tiny children, the Golden Pyrenees will make a good fit for most families.

The loyal, loving, and protective nature of this large breed makes the Golden Pyrenees a good companion and guard dog.

These dogs do however need a strong, determined owner that can control them and is also willing to give them the daily exercise they need.